A brief history of Earth Sciences at the University of Melbourne. 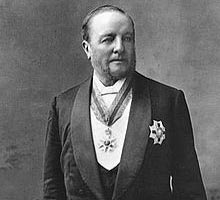 In 1854, Frederick McCoy was appointed as Professor of Natural Sciences. His appointment marked the beginning of geology and palaeontology teaching at the University of Melbourne but it would be another 85 years before the teaching of meteorology was established. The University began with only 16 students - today there are over 45 000.

In addition to teaching a wide range of science subjects at the new university, McCoy was an influential member of the Victorian Acclimatisation Society. This society was committed to introducing foreign plant and animal species to Victoria. They hoped that this would make Australia feel more European, provide game for sport and improve the economy. The society encouraged the introduction of animals and plants like blackberries, rabbits, carp and sparrows.

McCoy established a museum at the University that would eventually become today's Museum Victoria. In later years McCoy encouraged the establishment of a Museum of Technology, which would foster formal education in technology. 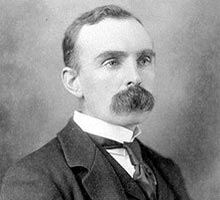 John Walter Gregory was appointed as the Chair of Geology and Mineralogy in 1899, following the death of Frederick McCoy in the same year.

Gregory's research was prolific and covered a wide range of topics, including petrology, palaeontology, and geology. While he was acting as Chair of Geology and Mineralogy he also acted as Director of the Geological Survey of Victoria from 1901-1904. Gregory was dedicated to education and he produced the first general textbook on Victorian geography in 1903.

Following a research trip to Lake Eyre, Gregory published a book titled 'The Dead Heart of Australia' in 1906. This is significant, as Gregory was the first to coin the phrase 'dead heart' in relation to Australia's desert centre. This phrase is still used today, over 100 years later. In 2011, when Lake Eyre filled following continued heavy rain, The Australian newspaper reported that the "lake at the dead heart of the nation" had come alive.

Gregory drowned in Peru's Urubamba River in 1932, trying to recover his field notebooks that were swept into the river when his canoe overturned. 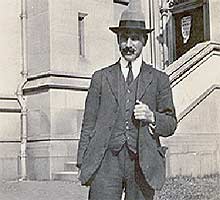 A year after the establishment of the Faculty of Science, Ernest Willington Skeats was appointed Chair of Geology and Mineralogy at the University of Melbourne in 1904.

In 1904, Ernest Willington Skeats was appointed Chair of Geology and Mineralogy at the University of Melbourne. In addition to this, Skeats was the Dean of the Faculty of Science from 1910-1915. He was a council member of the Royal Society of Victoria, president of the Australasian Institute of Mining and Metallurgy, founder of the Australian National Research Council and involved in the establishment of CSIR - the Council for Scientific and Industrial Research. Skeats studied the petrology of igneous rocks, with a focus on Victoria.

Fritz Loewe established of the Department of Meteorology at the University of Melbourne in 1939. This was the first meteorology department in Australia. Fritz Loewe undertook polar expeditions alongside his teaching duties.

1939 - Fritz Loewe and the Establishment of the Department of Meteorology.

Fritz Loewe, a geographer, meteorologist and glaciologist, established the Department of Meteorology at the University of Melbourne in 1939, producing 'Australia's first generation of graduate meteorologists.' He also undertook polar expeditions in addition to his teaching role at the University before retiring in 1961.

Prior to his arrival in Melbourne in 1937, Loewe had led a tumultuous and interesting life. In World War I, Loewe had served as a wireless operator in the German Army and was awarded the Iron Cross (First Class) for his service.

In 1933, Loewe lost his job at the German Meteorology Service because he was Jewish. In Germany, he was incarcerated for a short time and afterwards moved to England with his family to escape persecution. While in England he continued his meteorological research at the Scott Polar Research Institute before emigrating to Victoria. 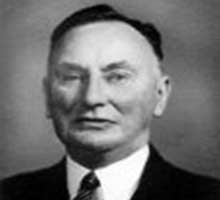 Herbert St. John Summers took over from Ernest Skeats in 1941 as Professor of Geology and Mineralogy.

When Ernest Skeats retired in 1941, Herbert St. John Summers succeeded him as Professor of Geology and Mineralogy. In 1939, he had been appointed as Sub-Dean of the Faculty of Science at the University of Melbourne. Prior to that, Summers had worked as an Associate Professor in the Department of Geology for 16 years.

In addition to his academic career, Summers was President of the Royal Society of Victoria from 1931-1932. Summers worked as Professor of the Department of Geology from 1941 until his retirement in 1944. 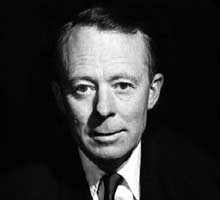 In 1944 he was appointed as Chair of Geology and Mineralogy at the University of Melbourne. In his role as Chair he organised for a library and workshop to be built. He furnished the School with new equipment, including an x-ray diffraction unit, a direct-current arc-emission ultraviolet spectrograph and a thermogravimetric unit for quantitative clay mineral analysis. 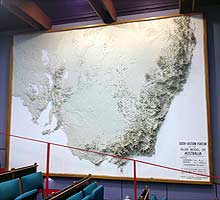 Students were making nose-pieces for armour-piercing bullets in their spare time and Prof Edwin Hills worked together on a large 3D togographic map of Australia with the Australian Army.

The effects of World War II, 1939-1945, were even felt at the Geology Department. Students at the School were encouraged to make nose-pieces for armour-piercing bullets in their spare time. In 1941-1942, Professor Edwin Hills, in collaboration with the Australian Army, began constructing a large-scale model of Australian topography. The plaster cast of this model currently hangs in the School of Earth Sciences' Fritz Loewe Theatre. 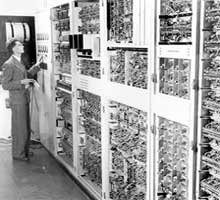 In 1956 the Council for Scientific and Industrial Research (CSIR) gave the University of Melbourne Australia's first digital computer. This computer was named CSIRAC - the Council for Scientific and Industrial Research Automatic Computer - and it was housed in the University's new Computation Laboratory. Uwe Radok, who became the head of the Department of Meteorology in 1960, remembered that CSIRAC was used for physics work during the daytime. At night, the computer was used to complete the first Australian numerical weather prediction project. This marked the beginning of computer modeling research in meteorology at the University. 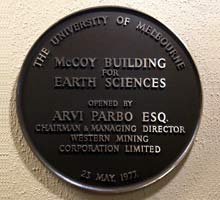 Housing the departments of Geology and Meteorology, the McCoy building was opened in May 1977.

In May 1977 the McCoy building was opened to house the Departments of Geology and Meteorology. The new building, still used to this day, provided laboratory and office space for geologists and meteorologists and also housed the Earth Sciences specialist library.

In 2012, the library closed and its holdings were moved to the Eastern Resource Centre. One of the most impressive features of the McCoy building is the Foucault Pendulum that hangs in the main stairwell. 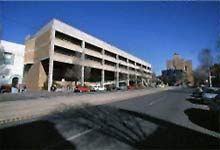 13 years after jointly being located in the McCoy building, the Departments of Geology and Meteorology were merged to form the current School of Earth Sciences in 1990.